In keeping with the monthly feature release schedule for pcb-rnd, on April 1, 2017, the gEDA PCB fork pcb-rnd will release new features designed to enhance backwards compatibility, improve compliance with ISO  3098, and anticipate future needs of users.

The ASCII character set has been ported from the ISO 3098 compatible open font osifont to the new pcb-rnd polygonal glyph format, to allow its use in PCB layouts.

This complements the existing stroked default font, as well as the stroked Hershey Sans 1 Stroke Font, also available for use within pcb-rnd.

The commitment to ongoing support for legacy users has been cemented with the addition of a Runic font, believed to be popular among Numenoreans who, it is thought, continue to use awk, C89, and at times, scheme.

Looking forwards to future users, and in particular, the Treaty of Organia in 2267, a Klingon pIqaD HaSta font has also been ported to pcb-rnd. 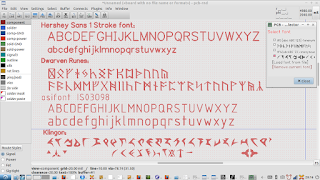 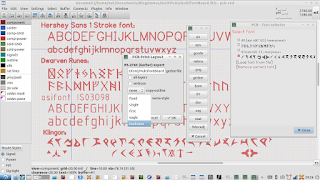 Here's a screen shot of the exported gerber being viewed in the gerber viewer gerbv, showing dwarvish runes, Klingon, osifont, and the Hershey Sans One Stroke font. 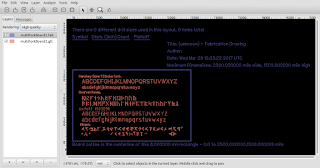 The support for these fonts has been made possible by the multiple font support recently implemented in pcb-rnd, in addition to the newly implemented support for polygons within font glyphs in the new pcb-rnd lihata (.lht) file format used for both pcb layouts and font files.

Both stroked fonts and polygonal glyph fonts (.lht) are dealt with in the font browser window: 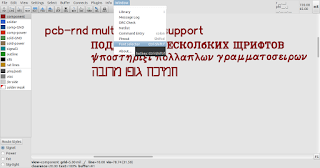 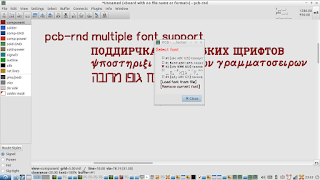 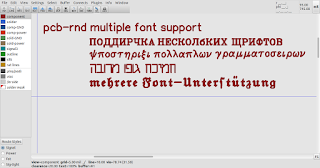 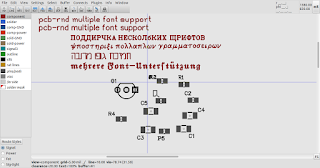 To join in on the fun, head on over and grab yourself a copy of pcb-rnd.

Over time, new fonts in legacy and/or lihata (pcb-rnd .lht) will be added to the new EDA tool agnostic repository, EDAkrill:

The EDAkrill project is an effort to create a platform and toolchain agnostic repository of footprints, symbols, fonts and anything else EDA related.