It goes without saying, that this is something we have all been waiting for since the dawn of UNIX and hierarchical file systems.

Finally, we now have the ability to mount a pcb layout as a virtual filesystem, allowing metadata to be inspected and modified from within the terminal, with scripts, or from within midnight commander... or even from within Emacs! 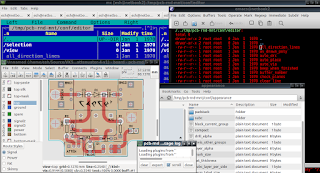 Enough said! Down to business!

The first thing is to have a computer running some form of *nix. pcb-rnd will build on most systems, and supports motif, gtk and headless CLI operation. Importantly, for fuse filesystem export, you will need to be running a version of GNU/Linux with fuse support.

The next thing is to checkout svn head of pcb-rnd

This can be done from a terminal with

if you do not have subversion (svn) installed, and you are on a debian/ubuntu based system, you can use the following command first to install svn

you should also install midnight commander, and the fuse development libraries which support userspace filesystems

once you have checked out pcb-rnd, do the following

during configuration, you should see amidst the output, something like

if ./configure is successful, and dependencies are met, you can proceed to build with the following command

once built, you can try out the build, with

then mount your pcb onto the mount point!

and now, you can go ahead and explore your pcb data

Of course, a file browser, a web browser, Emacs or midnight commander are much easier ways to explore the mounted fuse filesystem than using the CLI.

If you do not have fuse support, then you can still play along with midnight commander. To inspect a board's metadata in midnight commander without using fuse, the following configuration files need to be set up.

i.e. with the command

Then add the following in mc.ext (which is usually found in  /etc/mc/mc.ext) just above the final # Default section in mc.ext:

the above code determines which file endings are treated as mountable by midnight commander. In the example above, it is set to ".pcb"

The one remaining thing to do is to install the built version of pcb-rnd, so that midnight commander can launch it when required. You can do this from the pcb-rnd/trunk directory with the following command

On starting midnight commander, pcb layouts with matching file-endings will be automatically mounted, allowing the metadata to be traversed within the file browser.

Apart from the obvious motivation to impress your friends, coworkers and spouse, there are some very simple, slightly impractical, and arguably silly, script examples that demonstrate the power of this new capability, and how easy it is to access board metadata via a virtual filesystem.
Posted by Erich at 00:11 2 comments:

After getting around to long needed refactoring of translate2geda, the work in progress result is translate2coralEDA, which has cleaned up the code, as well as adding support for features that are not possible in either gEDA PCB or KiCad.

The code will be back-ported to translate2geda, with exported  elements subject to the limitations of the gEDA PCB footprint format which will be the default for translate2geda.

The default export format for translate2coralEDA is pcb-rnd (.lht), which supports padstacks, polygonal copper pad shapes, as well as arcs on copper within footprints, which are called subcircuits in pcb-rnd.

Perhaps the best example of the support for new features in the data model is the improved gerber importing code, which can create pads from arbitrary polygonal shapes - subject to sanity checks on size and geometry - and import copper arcs as copper features rather than pads, within footprints (subcircuits). 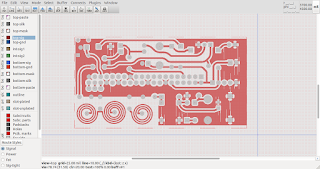 Gerber import is subject to a  number of caveats, namely, the data in a gerber file lacks logical grouping, and heuristics are used to try and identify pad or pin features. These heuristics will occasionally be fooled by islands of copper pour that are about the right size to be a pad or pin. These can easily be converted back into polygonal copper features within pcb-rnd however.

The most important caveat is that some EDA tools, like Eagle, paint the features with a raster of thin horizontal lines delineated by similar lines forming borders of copper shapes, making techniques such as this far less practical.

Accordingly, gerber conversion is a last resort and is really only for those keen to salvage design data, extract features, i.e. exotic footprints, or modify reference implementations for which only gerbers have been provided.

pcb-rnd can export to KiCad, Protel Autotrax and gEDA PCB formats, subject to the limitations of their respective data models.

For those wondering, the spiral inductor footprints were created with the SpiralInductorFootprintGenerator utility, also available on github.
Posted by Erich at 18:03 2 comments: