This is a pictorial guide to PicAXE serial cable construction based on the suggested wiring in the PicAXE manual. I had to take the photos for a construction manual, and thought I might as well share them.

There is an alternative PicAXE serial programming connector, the 3.5mm stereo plug, which is how the USB programming cable available from Rev-Ed is terminated.

Although many modern PCs do not have a DB9 serial connector, a suitable PC can be found on the side of the road in case one with a DB9 is needed for hardware hacking most days, and failing that, USB to DB9 adaptors can be bought for less than $5 quite easily.

Suitable wire, sometimes even with attached headers can be scavenged from discarded electronics.

The three wires can be plaited to keep them tidy, before soldering to the DB9 connector.

A backshell can be put on the DB9 connector to improve ruggedness. 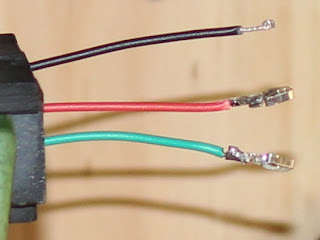 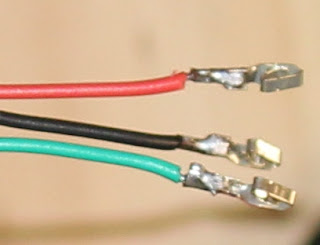 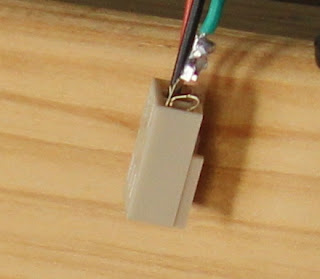 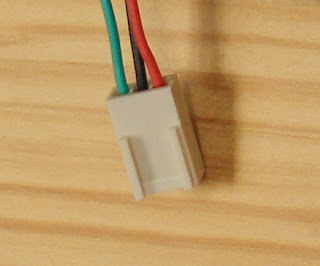 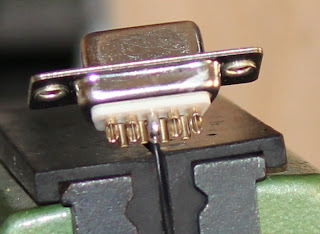 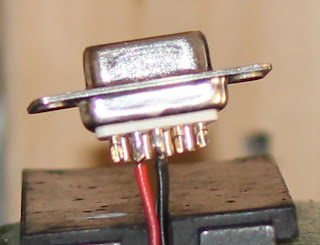 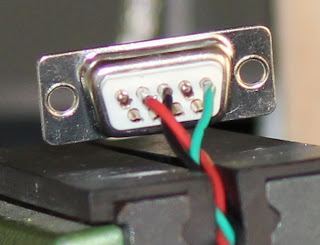 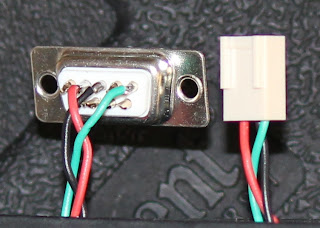 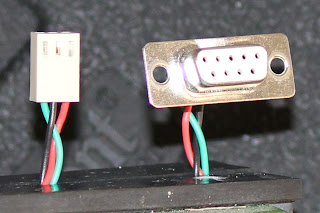 Note the 10k and 22k resistors forming part of the necessary Serial Rx circuitry for the PicAXE to behave, even if no programming header is needed. 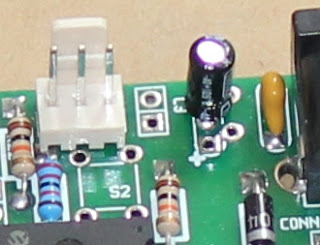 One could just use a single standard value resistor whose value is closest to the required Pi network resistor value required, but in my book, any job worth doing is usually worth overdoing, unless it's boring.

The PCB has been designed to allow a pair of resistors in parallel to be used to achieve each of the required Pi network resistances.

So, how to quickly and easily find a good match across possibilities in one decade versus three possible decades to choose from in parallel = 36 x 12  = 432 possibilities?

A cheat sheet knocked up in an openoffice spreadsheet led to the following table (saved in tab delimited CSV format, converted to three decimal places, saved as html, then cut and pasted the table html into the blog from a text editor).

To use it, find the closest match to what you need by visual inspection, using the most significant figures. Read off the corresponding values at the top and the left side of the table - these are the resistor values in parallel giving the value in shown the table. Multiply the values by by 10, 100, 1000 etc... to get you into the right decade for your needed value, et voila:


In this case, the target values, closest parallel approximations, and % error are as follows:

From this we see at most, around half a percent error... not awful...

The ten values above are suitable for 1dB, 2dB, 3dB, 5dB and 10dB Pi attenuator networks. If you look closely at the table, the ten values are in bold.

Those wanting 20dB attenuator network values can find them, but Jim, VK5TR reckons one is better off using two 10dB stages rather than excessive attenuation in one stage to avoid excessive coupling between adjacent step attenuator sections, and I think that makes good sense, so I have not bothered to calculate them.

Another reason to use parallel resistors is that most AHARS (Adelaide Hills Amateur Radio Society) members have around 12,000 resistors in a box not doing much from that one time, at AHARS, we bought 1.28 million resistors and sorted them into bulk packs...

After some more work in the spreadsheet, we have a sorted list for easy value lookups: