Just a quick posting about the i-Kaktusss iambic keyer featured in the May edition of Amateur Radio magazine, published by the Wireless Institute of Australia.

The i-kaktusss is an "Iambic keyer and Koch trainer using a seventeen segment screen". 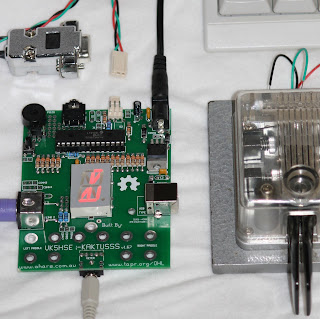 It also has PS/2 keyboard support, and provision for simple keyer fabrication with paperclips if desired on the actual PCB, if an external iambic keyer is unavailable.

The immediate conversion of the Morse keyed in via the paddles to a character on the LED display makes learning Morse much more reflexive, and the practice modes with pseudo random text and stored text playback avoid all the hassles of practice tapes and CDs, by giving a quick display of the character after it is sounded.

It also has modes that play the morse and display the character entered on a PS/2 keyboard.

It will also work just fine as a beacon or a plain old iambic keyer.

The i-Kaktusss can be powered by either a 12V DC supply or a USB cable.

The PCB has been designed with wide tracks and large pads to make homebrewing easier and also soldering by novices easier, and there is copious provision for headers for external wiring if required.

The i-Kaktusss is the culmination of my ongoing attempts to become familiar with the gEDA PCB design tools on linux, with guidance from Jim VK5TR and Mitch at Hackvana, who supplied the PCBs.

Once you get the hang of schematic capture in gschema, followed by conversion into a PCB design file, and playing with the layout in PCB, you'll try things you'd not dreamt of with breadboards, veroboard, paddyboard/manhatten construction, or deadbug construction.

Best of all, the gEDA tool suite is free.


Anyway, getting back to the i-Kaktusss:

The PicAXE software which is free to download is available here and has copious online documentation available here, which will allow builders to modify if needed and load the code onto the PicAXE28x2.


Amateur radio is all about collaborative efforts which advance the art, so software patents and restrictive intellectual property rights are not just an obstacle to encouraging the younger generation to solder, code and experiment, they are antithetical.

BASIC has been used for the first release of the i-Kaktusss to maximise the ease with which programming novices can implement their own changes to the code.
Posted by Erich at 08:55